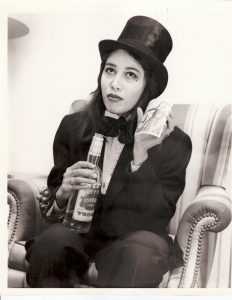 Marlane was born in San Francisco and raised in San Pedro.  Marlane Meyer is of Polynesian and Native American (Cherokee) ancestry on her father’s side and German and Swedish on her mother’s side. She attended California State University-Long Beach 0where she studied under Murray Mednick, one of the founder of the Padua Hills Festival. She was the dramaturg for the Latino Actor’s Workshop at the Los Angeles Theatre Center in 1986. Meyer has a bicoastal career; she has worked in both Los Angeles and New York. In addition to a successful television writing career, including episodes of “Sirens”, the teleplay of “Better Off Dead”, “Life Stories” for NBC, and “Out of the Sixties” for HBO, she teaches playwriting at the Yale School of Drama. Meyer is a member of the New York Playwrights, the Dramatists Guild, the Women’s Project, PEN Center West, and the Polynesian Society, and she is an alumna of New Dramatists.

Although Meyer is not yet acknowledged as an important contemporary American or Asian American playwright, her works have been awarded many prizes. Etta Jenks won the Kesselring Award and the Dramalogue Award in 1987; Kingﬁsh won the Dramalogue Award in 1988 and the PEN Center West Award in 1989; The Geography of Luck won the Dramalogue Award in 1989; and Moe’s Lucky Seven won the Susan Smith Blackburn Prize in 1993. Meyer also received the Brody Foundation Grant for Literature in 1987, the Creative Anists Public Service Grant in 1989, and a National Endowment for the Arts Playwriting Fellowship in 1990. Moreover, Meyer, a former playwright-in-residence of the Padua Hills Playwrights’ Workshop, belongs to various literary coteries, such as the Dramatists Guild, the Writers‘ Guild of America East, PEN Center West, the New York Playwrights’ Lab, and the Women’s Project.

Marlane Meyer writes in a style that she describes as “extended realism”; it is a gritty, evocative melding of poetry with the underbelly of popular culture. Etta Jenks, for example, employs twenty-one scenes and fourteen character to depict one woman’s journey through the Los Angeles pornography business.

A proliﬁc writer, Meyer has only three plays published so far: Etta Jenks
(1988), The Geography of Luck (1989), and Moe’s Lucky Seven (1993). Her
works, generally speaking, deal with gritty reality and lives and relationships
between socially outcast characters.

The Geography of Luck also elides an exposition but consists of eighteen episodic scenes. Centering around an ex-rock star, Dixie, who has just been released from prison, the play delineates the protagonist’s relationships with his father, mother, women, and friends in his life. As Meyer notes, “[Dixie‘s] relationships in the play are the landmarks that guide him, teach him, and move him through the terrain—hopefully toward something like the promised land, to home . . . to yourself” (“Mapping the American Heart”). The primary back- ground of The Geography of Luck is Las Vegas; however, some of the scenes, as the dramatist notes, are set in dreams.